A Look into WoSo Thoughts

As we approach what may arguably be the biggest game of the World Cup, it’s hard to ignore all of the excitement surrounding our national team. No, not the men… the women. With a celebrated history of unofficial international tournaments, fighting for recognition of the game to FIFA, and then finally having the first Women’s World Cup in 1991, the United States has been at the forefront, winning 3 titles and having even more representation on the world level before that.

We, the Independent Supporters Council, set out and gathered our representatives from the National Women’s Soccer League for a quick interview on women’s soccer in the United States and wanted to hear their answers to some questions we had in regards to women’s soccer.

Want to learning more about the groups? Check out your local ISC NWSL groups below: Chicago Local 134 - Chicago Red Stars

Those participating are as follows:

ISC: It could easily be argued that the US Women’s National Team has done more to further the sport of soccer in such a short amount of time than any other entity. What are your thoughts on this and do you think women’s soccer is continuing to grow the sport across all demographics?

134: This is definitely valid. I think most of us can trace our support of women’s soccer back to the USWNT. Their impact is truly huge globally, and obviously particularly in the US. I think WoSo is continuing to grow and you can see that in some of the performances at this World Cup. I think seeing some of the overtly political stances taking place around this World Cup (USWNT suit of US Soccer, Ada Hegerberg sitting out the tournament) is something we all should be encouraging. On a different note… can we talk about youth soccer access and “pay to play”? As we fight for equality on the highest levels, we have to simultaneously advocate for equal access on the ground level.

Squadron: We agree that the USWNT has been a pillar of success when it comes to growing the game, and opening up discussions about soccer. Many demographics that wouldn’t be “interested” in women’s soccer have now taken the time to comment or even argue a stance because of the USWNT. The team being such a dominating force piques interest, whether positive or negative from sources that wouldn’t usually write about or watch. With other teams taking stands against their federations, it’s a positive step to growing the game indefinitely. C9: The spectator aspect of WoSo is definitely growing amongst all types of people. The community of women’s soccer fans is probably one of the most diverse and inclusive in sports. But there is work to be done on the player side. As 134 mentioned, “pay to play” is a very large obstacle on the youth level. I’m not sure what the immediate solution to this is, but I would love to see the day when all NWSL teams have full development/academy systems that can reach the communities that are currently being underserved.

Are the Federations effective in growing the sport across all demographics?

From the lens of getting and finding more and new talent, time will tell if the system is still just limited to families that have enough disposable income and time.

From the lens of fan support, when the USWNT wins the World Cup there is great support, but that support is not carried through the non World Cup years. Why? Why does NBC show games of the premier league of another nation and not the US National stars playing in their own domestic league? The same players that were just on the news, on every station, or in a National parade covered, in some way, if not even just a mention, on every news station. US Soccer Federation has a market darling that it doesn’t want to sell. Why not? The USWNT brings in money, but they don’t capitalize on it, or worse yet, supplement their other team with those earnings.

ISC: All of our National Team players come from NWSL teams. How do you think the culture differs from their club teams to the national and international stages?

134: This is an interesting question and I’d be really curious to hear the Red Stars players answer this. I think generally switching between the National Team where you’re sort of in this bubble of relative prestige and celebrity to the NWSL teams where some of your peers earn way less than a living wage must be sort of a tough thing to wrap your head around.

Squadron: Resources would probably be the main difference for some teams. Obviously not all NWSL teams are up to par with others, just as not all national teams are equal with resources. I’m sure some of the USWNT players coming from their NWSL teams are more prepped and rested than others. I think there could also be the balance of being the main star marketing tool for your NWSL team versus as the whole team unit with individual spotlights. C9: Considering we support the team in the shallow end of the NWSL resource pool, I would think the differences are night and day.

ISC: What are your takes on all of the promotion and media of the US Women’s National Team and the World Cup? Other countries seem to have put out media promoting their teams as well. Do you think this is something new? Are federations, corporations, sponsors, etc. trying to change the view of women’s soccer or are they missing the mark?

134: Don’t even get me started. Honestly I want to sit down and watch every World Cup ad and mercilessly critique. There are some good ones, but what I’m sick of is the “women’s soccer is inspirational because of young girls” trope. I’m just bored of that. I’m an adult, I watch so much women’s soccer. Speak to me, not to my 9 year old self, not to my *very far in the future* hypothetical daughters. I think they’re missing their mid-20s Millennial demo in a big way. Did anyone see that Sinclair ad though? I’m a fan of that.

Squadron: More companies are getting involved with ads which is great, but like Local said they are directed towards the younger generation in turn missing the mark for the current demographic of millennial+ fans who have the money to help build the leagues and interest now. Not in 10 years. Being a role model can be a positive thing, but it also puts players into a box of cookie cutter athletes who cannot show anger, frustration, or *gasp* curse. Ads where they are shown as bad ass athletes overcoming all the boundless obstacles in their way seem way more inspiring than expectations of prim and proper stereotypes.

C9: Have to agree 134 and the Squadron here. I’m done with the “look how inspirational these women are to young girls” crap. It just continues to push the false narrative that women’s soccer is for 10 year old girls. It certainly doesn’t do much to help us in the NWSL. 10 year olds don’t buy season tickets. Millennials and middle aged folks (shoutout to GenX!) need to be the targets.

They’ve been selling us the future for far too long and it’s a disservice to women that are playing right here and now, both for club and country. Young girls are perfectly capable of finding their heroes without a shoe company telling them where to look.

ISC: If there is one bottom line you want soccer fans to get out of this World Cup, what would it be?

Squadron: Female athletes are in fact athletes. Professional athletes at that. Their gender is not less than, and shouldn’t be seen as weaker, less competitive, or less entertaining. Parity is growing because more teams are being deservedly recognized by their Federation’s, as well as their countries. Women’s soccer has been knocking for a few years, and hopefully it burst through soon. C9: Women’s soccer isn’t just played every 4 years. Club play is vital to the future of the WoSo. My hope is that fans continue to follow these athletes in their respective leagues. There are 58 women in France who also play in the NWSL. They will all be back with their club teams in a few weeks. If you have a local team, support them. If you don’t, support the league as a whole. Whether they are NT players or not, all of these women are worth your investment.

Statement Regarding MLS' Return To Play 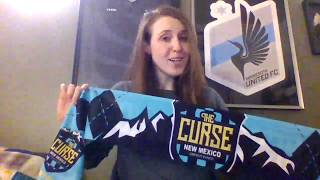 Statement Regarding MLS' Return To Play